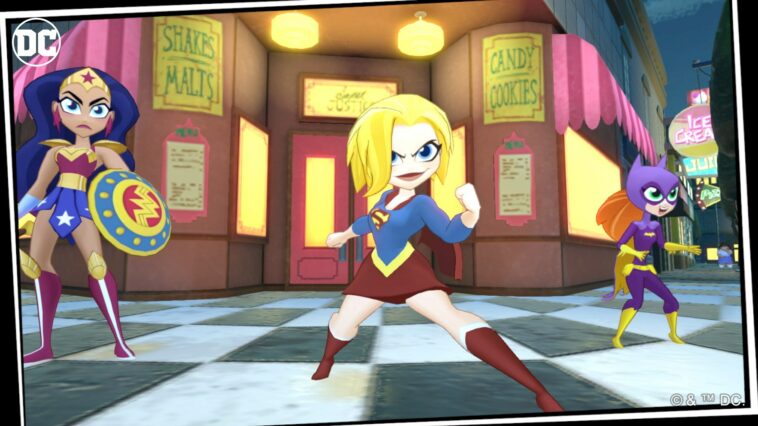 Today we are taking a closer look at DC Super Hero Girls: Teen Power for the Nintendo Switch. It is based on a TV show of the same name. A TV show which has spawned a ton of merch and has become pretty popular. I have to say that this game is not actually that bad at all, but it does have some things that are rather annoying and that is what I am looking at today.

There Is No Co-Op!

This was the most surprising thing about DC Super Hero Girls: Teen Power for me. In a game that features a team of superheroes and villains (there are six playable characters) and you can even have other characters helping you out. Why is there no couch co-op in this game? It makes no sense to me at all, it is the kind of game that would be great for a parent to play with their kids or even a couple of friends to play together.

The game for the most part controls very well. Each character has her own style and moves that you can do. The problem is that some characters that can fly such as Supergirl or even Catwoman with her athletic move set feel very “strange”. I would not say that these controls are broken or anything like that, they just feel way more unresponsive than when you are on the ground and can take a very long time to get used to.

You Need To Know The Show To Understand The Story

One thing that DC Super Hero Girls: Teen Power for the Nintendo Switch manages to nail is being just like the TV show. The characters all act the way they do on the show and they have captured their personalities perfectly here. So, what is the problem? Well, this game demands that you already know these characters, the world they live in, and their relationships too. If you do not, you will probably feel lost with the story and not find it all that great

Enemies Take Too Much Damage

I get if you are playing as Batgirl that it may take more hits to take down an enemy, but Supergirl and Wonder Woman? The combat in DC Super Hero Girls: Teen Power is actually a lot of fun. Yes, the game is a real button masher, but as someone who liked 90s beat-em-ups, I like it. The issue is that the enemies are real damage sponges and it just gets worse as you progress through the game. Enemies are not tough and the AI is not all that smart. They just take way more hits and have shields! It can turn what is fun and solid combat into a bit of a chore.

The Social Aspect Could Have Been Expanded On

Ok, so the complaint I have here is actually a bit harsh. DC Super Hero Girls: Teen Power for the Nintendo Switch has a pretty cool social dynamic going on. You can play as one of the six characters in their alter ego form and hang around one of three areas that are a decent size. You can take photos, use social media and just hang out. It is a great idea and a nice distraction from all the fighting. This is kind of underutilized and something I feel would have been much better if it was expanded on.

I guess overall the million-dollar question you are wondering is it worth the money. Honestly speaking I think that DC Super Hero Girls: Teen Power is a far better game than people will probably give it credit for. It is not an amazing game or anything like that, but if you enjoy the show, I would wager you will probably enjoy the game. I think visually it looks cool for what it is and personally, I picked it up for just under ﾣ40, and whilst that might be a little bit higher than I would have liked to have spent, if I take into account it’s a cartridge on the switch which for the most parts are not always insanely cheap I still had around 7 hours of fun and I’m not disappointed with my purchase. Yeah, it probably won’t win a game of the year award but certainly might hover into the hidden gem category come to the end of the year.

Anyway peeps that’s my quick take let me know your thought in the comments if you had a chance to play the game and what are your thoughts.