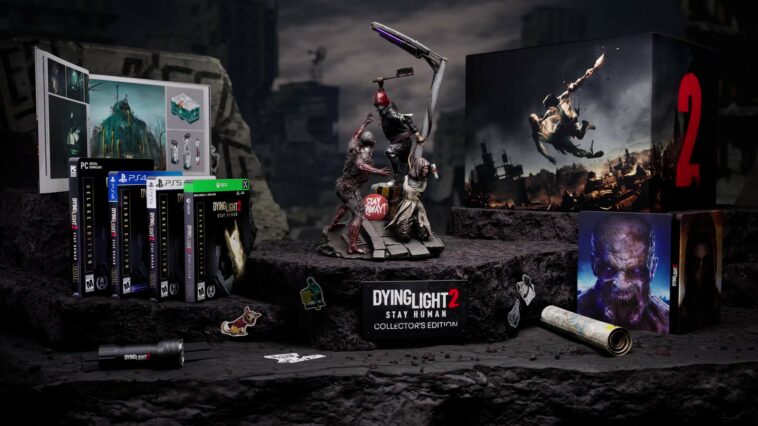 On December 7th, 2021, Dying Light 2: Stay Human will be released for PlayStation 4, PlayStation 5, Xbox One, Xbox Series X/S, and PC. Like most games, there are different versions of the game available and that is what we are looking at today. Plus, the Collector’s Edition is pretty much sold out everywhere, so is it worth the money it is going for on eBay right now?

If you pre-order Dying Light 2 on any of the platforms, you get what is called the Reload Skin Pack as a pre order bonus. With this, you get a Reload Outfit Skin, A Reload Weapon Skin, and a Reload Paraglider Skin too. This pre order bonus appears to be available no matter where you order the game from.

This version of the game is the most basic that you can get. It is available for all platforms and can be purchased physically or digitally. Here you only get the base game, plus the pre order content that comes with the Reload Skin Pack. This is probably the version to get if you did not play the first game and are not sure if this game is going to be 100 percent for you.

With this, you get the first batch of story DLC. You also get the Deluxe Digital Items pack which contains, a legendary skin pack, exclusive weapon charms, wallpapers, a digital comic, a digital artbook, and a digital soundtrack. If you purchase this edition physically, you also get a steel bookcase.

The Dying Light 2: Stay Human Ultimate Edition is only available digitally, there is no physical offering of this bundle at all. With this, you get all of the items from the Deluxe Edition, but this also will include the second batch of story DLC that will be released at some point in 2022.

You also get the Ultimate Digital Items pack which contains a 2H Night XP Boost and crafting items. Currently, this is the only way to get both the first and second story DLCs with the game.

Here is the big boy! The Dying Light 2: Stay Human Collector’s Edition is only available physically, but it is sold out everywhere. Currently, it is going for anywhere between £150 and £200 on eBay! With this, you get everything that comes with the Ultimate Edition. However, this comes with some really cool physical items as well. You get an awesome, Defender of the City statuette, a UV flashlight, a map of the city, 3 postcards, a Voice of the City stickers pack, a thank you letter from the creative director, and a really cool collector’s box. To be honest, the going rate for this on eBay is not that much over retail, but you would have to assume this could go even higher once it is actually released so you might want to jump on this now if you like the sound of what it is offering.