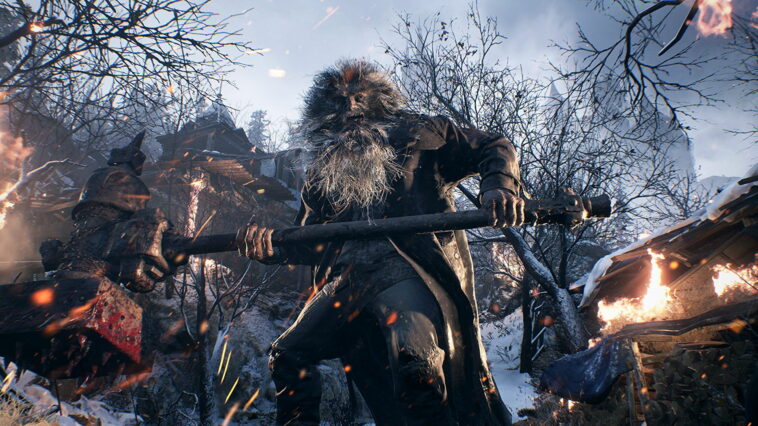 Resident Evil Village is one of the biggest games of 2021 and I have had an awesome time with it so far. I am actually on my second playthrough as I write this. What is so great about the game is the way it takes what was started with Resident Evil VII, but it adds a bit more Resident Evil 4 style action to the formula too.

To help you get started on your nightmare of a journey, we are sharing with you 10 tips and tricks for Resident Evil Village.

Using The Map To Find Items

I would probably go as far as to say that Resident Evil Village has the best map of any Resident Evil game. When you bring the map up, pay attention to the colors of buildings. If they are grey, it means you have not been in them yet. If they are blue, you have found everything there is to find in them. However, if they are red this means that there is something in there that you missed.

The first big purchase that you need to make in Resident Evil Village is the increased inventory item from The Duke. At first, it seems like if you Tetris your inventory you can make everything fit. This does not last long as some of the weapons you pick up like the sniper rifle, for example, take up a great deal of space. Increasing your inventory should be done before you spend any money on anything else!

It is cool that you can buy ammo from Duke and in a tight pinch, this is perfectly acceptable. However, Resident Evil gives you all you need to make your own ammo. You can make handgun ammo right from the start and the game is very generous with the stuff that is laying around. Very rarely did I find myself low on handgun ammo during my first playthrough. It is also worth noting, that you can buy recipes that allow you to make shotgun, sniper rifle ammo, and more from Duke. At the very least you want to buy the shotgun and sniper rifle one.

Ok, so this is more of a tip to help you enjoy the game more than helping you get through it. It may be tempting to hit the skip button whenever the Duke starts to talk, but if you do this you miss out on some great stuff. He can fill in parts of the story and even offer some cool quips such as his reference to his pal, the merchant from Resident Evil 4!

During the early part of the game, you may wonder what the heck you have gotten yourself into as horde after horde of werewolves are coming your way. It may be tempting at first to stand and fight, but you have to be smart. You can run into many houses and there will be a shelf near the door, you can use this to block the door and give yourself a chance to breathe. You can also shoot bags of flour which will cause them to be stunned. Giving you a chance to run away or shoot them.

I will admit that I was about ¾ of the way through my first playthrough until I noticed this! You can kill various animals in the game from goats to fish. These will give you meat that you can then take to Duke. You can just sell this to him, but you can also use the food you have picked up for various upgrades. The most notable one being the one that will give you more health overall!

In Resident Evil Village, Duke has some awesome weapons that you can buy from him and it is very tempting to have one of each. The thing is, just stick with the weapons that you like. For me, it was a handgun, the second shotgun, and the sniper rifle. I played through the majority of the game with these three weapons and what I did was max out all the upgrades for them. You can make it so they can take more ammo, do more damage, and so on. It is far better to have a few weapons that are powerful than a bunch that are rather weak.

Always Have Your Favorite Weapons At Hand

This ties into what we were just talking about. Resident Evil Village lets you have four weapons in your weapon wheel that you can quickly select with one of the four directions on the d-pad. Make sure you have the weapons you always rely on here so you can quickly switch between them. I had the shotgun, handgun, sniper rifle, and knife. Knowing where they are is great so you do not have to think when you want to quickly change a weapon.

There Is An End Credits Scene

I thought that the story was one of the best aspects of Resident Evil Village. It had me hooked from the start all the way until the end. The ending is pretty damn awesome, but there is more! There is a scene that will play after the credits that is pretty mind-blowing and may even hint at what we can expect from Resident Evil 9! Make sure you do not shut the console down before you see this.

Take Advantage Of The Challenges

Resident Evil Village is not the kind of game that is a one and done. Once you beat the game you will learn about CP (Challenge Points) you have a big list of challenges that will earn you CP and you can use CP to buy cool stuff such as better weapons, abilities, and more. These will make each playthrough more and more fun as you are able to run through the village super overpowered! It is worth noting that once you beat the game, you also get access to the classic Mercenaries mode which has been a real staple of the series for a while now.